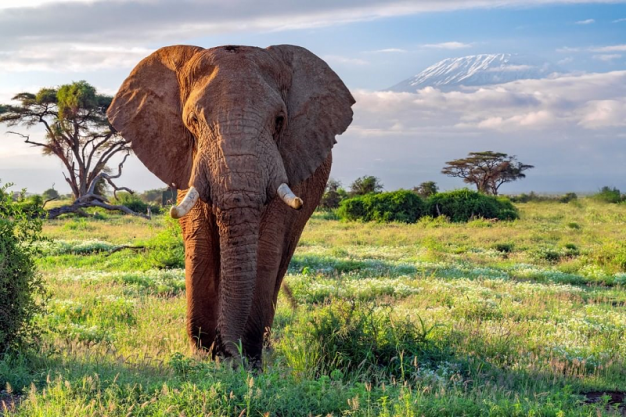 Safari adventure exploring three top destinations in Kenya and Tanzania. Mara is known for almost guaranteed sightings of the Big 5: Lion, Elephant, Leopard, Buffalo, and Rhino. It is also popular for the annual migration of zebra and wildebeest which occurs from July to October.

Lake Nakuru is home to a huge population of pink flamingos and 400 species of birds; while Amboseli is known for the large herds of elephants and most especially for its stunning view of Mt. Kilimanjaro. Serengeti keeps on scooping awards as one of the best safari parks in Africa, and let’s not forget the Ngorongoro Crater and Tarangire. 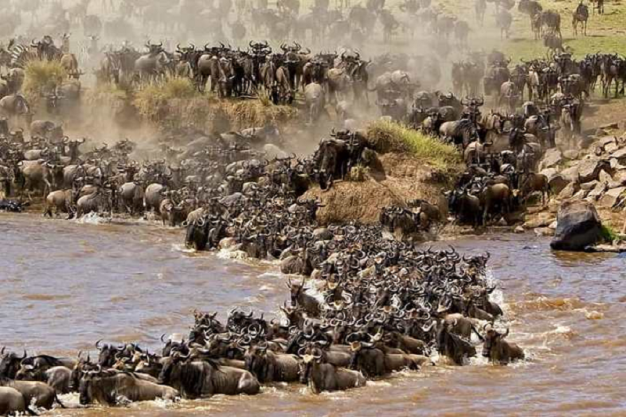 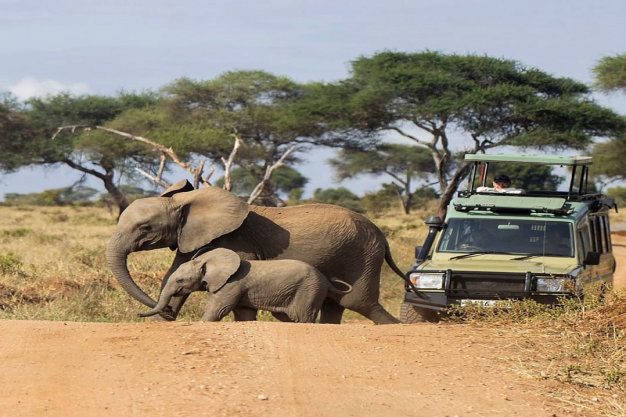 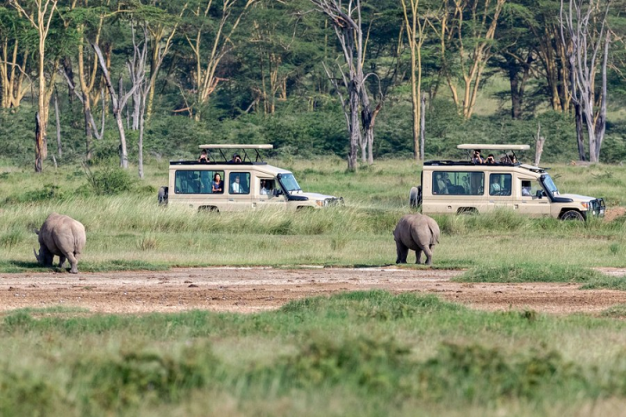 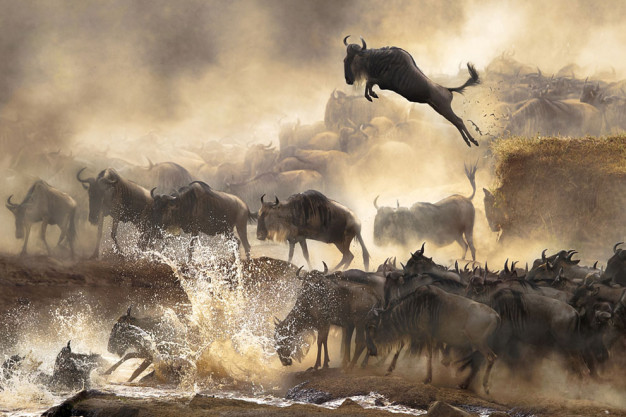 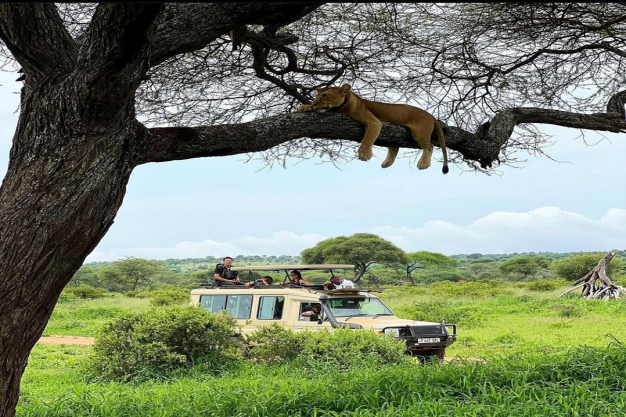 You will be picked up from your hotel in the morning and we will first drive through the viewpoint of the Great Rift Valley to take some pictures of the beautiful landscape. After which, there will be another stop-over for lunch before we continue our drive to the Masai Mara National Reserve. Upon arrival at the lodge, you will be guided to your accommodation to settle in and relax with snacks and coffee. This will be followed by your first-afternoon game drive, your first taste of African wildlife. Accommodation: Camp Meals & drinks: Lunch and Dinner (Breakfast not Included) Drinking water (Other drinks not included)

The whole day will be spent in game viewing and exploring the park’s high concentration of wild animals. On the plains are enormous herds of grazing animals including the elusive Cheetah and leopard hiding amidst acacia boughs. In the afternoon, an optional visit to a Maasai village can be arranged (an entrance fee of 15 USD is not included in the package). Here you will be welcomed by the locals singing and dancing, a sacred ritual that has formed their rich tradition. Part of the tour includes a glimpse of their local homes and way of life. Accommodation: Camp Meals & drinks: Breakfast, Lunch, and Dinner Drinking water (Other drinks not included)

We will start the day with an early morning game drive and return to the lodge for breakfast. After which, we will depart for Lake Nakuru National park located in the Great Rift Valley. Lake Nakuru is home to a stunning flock of lesser and greater Flamingos, turning the lakeshores in to a magnificent pink stretch. The park has diverse species of over 400 birds such as White Pelicans, Plovers, Egrets, and Marabou Stork. It is also one of the very few places in Africa where you can see the White and Black Rhino and rare Rothschild’s Giraffe. Accommodation: Hotel Meals & drinks: Breakfast, Lunch, and Dinner Drinking water (Other drinks not included)

We will start the day with an early morning game drive in Lake Nakuru and depart for Amboseli national park. Accommodation: Meals & drinks: Breakfast, Lunch, and Dinner Drinking water (Other drinks not included)

We will set off early to see the magnificent view of Mount Kilimanjaro and set off for another extensive game drive before the clouds build up over the summit. Amboseli is an excellent place to view a multitude of wildlife such as Wildebeest, Giraffes, and Baboons. An optional visit to a Masai village can be arranged after breakfast. Maasai warriors are also known as the proud nomadic tribe whose legendary prowess in battle and single-handed acts of bravery in fights with wild animals have spread across the world. Accommodation: Meals & drinks: Breakfast, Lunch, and Dinner Drinking water (Other drinks not included)

We will set off for an early morning game drive and head to Arusha through the Namanga border. Dinner and overnight will be in Arusha town. in Ambassador Hotel Meals & drinks: Breakfast & Lunch and dinner Drinking water (Other drinks not included)

After breakfast, drive to Tarangire National Park, and enjoy a full-day game drive with a picnic lunch. The park consists of natural vegetation mainly Acacia woodland and giant African Baobab trees, with huge swamp areas in the south. Both the river and the swamps act like a magnet for wild animals, during Tanzania’s dry season. The Tarangire National Park is reputed to contain some of the largest elephant herds in Africa. This African National Park is also home to three rare species of animals – the Greater Kudu, the Fringed-eared Oryx, as well as a few Ashy Starlings. Dinner and overnight at Jambo Camp Meal plan: Lunch, Dinner, and Breakfast.

After breakfast, we head towards the Serengeti National Park, via the beautiful high lying farmland of Karatu and the Ngorongoro Conservation Area. Leaving the highlands behind, we descend into the heart of wild Africa – the Serengeti National Park – with its endless plains, rolling into the distance as far as the eye can see. We head to the central park area, known as the Seronera area, one of the richest wildlife habitats in the park, featuring the Seronera River, which provides a valuable water source to this area and therefore attracts wildlife well representative of most of the Serengeti’s species. We arrive in time for lunch and enjoy an afternoon game drive in the Serengeti National Park. Dinner and overnight at Serena Public Camp (basic Camping) Meal plan: Lunch, Dinner, and Breakfast.

After breakfast, have a full-day game drive in the park, and lunch at the campsite. The park has an endless plain which is a home for lions, leopards, elephants, cheetahs, buffalo, wildebeest migration, eland, wild dog, gazelle, crocodiles, and many more. Also, you will enjoy a variety of birds that decorate the park with different sounds. Dinner and overnight at Seronera Public Camp (Basic Campsite) Meal plan: Lunch, Dinner, and Breakfast.

After breakfast, you descend into the crater and enjoy a full day's game drive in the crater. The Ngorongoro Crater is one of the most densely crowded African wildlife areas in the world and is home to an estimated 30,000 animals including some of Tanzania’s last remaining black rhinos. Supported by a year-round water supply and fodder, the crater supports a vast variety of animals, which include herds of wildebeest, zebra, buffalo, eland, warthog, hippo, and giant African elephants. Another big draw card to this picturesque national park is its huge population of predators, which include lions, hyenas, jackals, cheetahs, and the ever-elusive leopard. We will enjoy a picnic lunch on the crater floor. Late afternoon drives back to Arusha Dinner and overnight in Arusha

After breakfast, you will be picked up from the hotel and you will board a morning or afternoon shuttle back to Nairobi where your tour ends.

We may use cookies or any other tracking technologies when you visit our website, including any other media form, mobile website, or mobile application related or connected to help customize the Site and improve your experience.
Read Policy